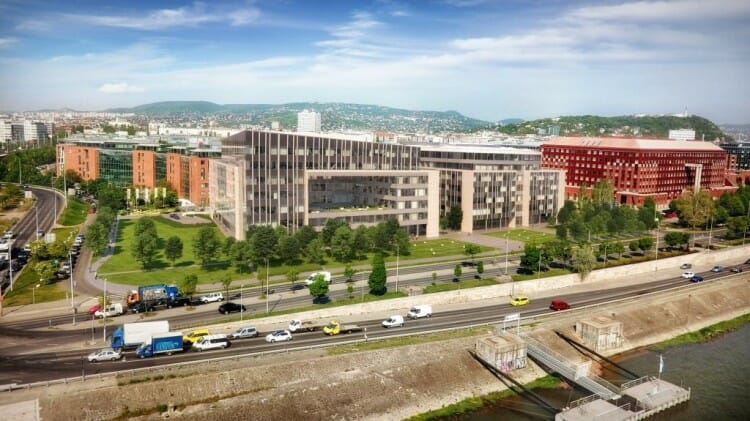 Evosoft Hungary to move into new office building by 2021

Leading Hungarian IT company evosoft Hungary Kft, 100% owned by Siemens, to rent a soon-to-be-built office building in Budapest • More than 20,000 sqm to be developed by WING Zrt., handover expected in January 2021 • In the new building, a flexible software developer office concept will be implemented for more than 1,500 software developers 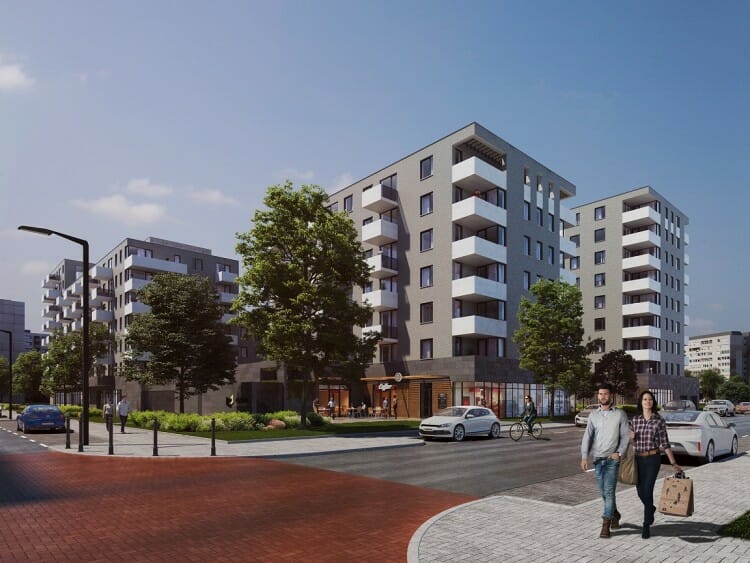 New apartment complex is under construction in Budapest’s 13th district

The construction of the Kassák Residence has officiallly begun. The Kassák Residence apartment complex will bring the highest standards of resident services and smart living solutions to the Hungarian housing market. This new development is executed by WING’s new residential co-brand, LIVING. The new complex will feature modern services such as car-sharing, housekeeping, onsite delivery point, fully-equipped tool “shed” for DIY jobs and personalized smart-home solutions. In the first phase of this 3-phase development an apartment complex of 231 units will be delivered in Budapest’s increasingly popular 13th district in the direct vicinity of the Váci business block. 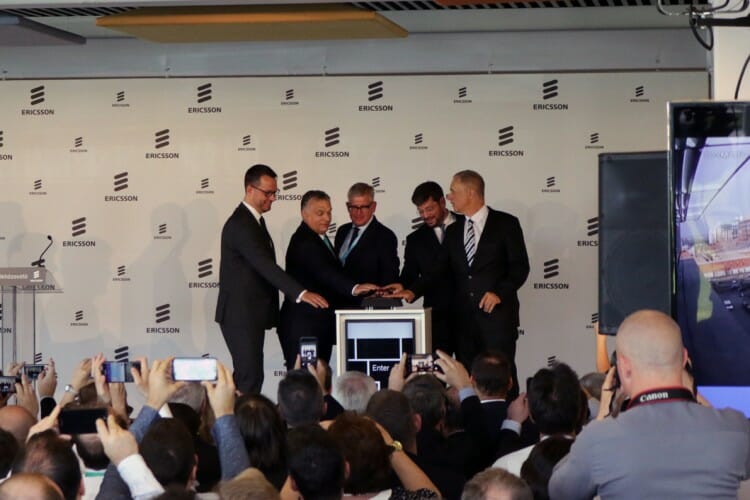 Wing has officially handed over the new Ericsson hq.

The new building developed by WING showcases the industry’s latest high-tech solutions, and has LEED Gold certification making it one of the greenest office buildings in Hungary. On May 29th, 2018, one of Hungary’s most modern office buildings, the Ericsson House, was officially handed over in the presence of the Prime Minister of Hungary and Ericsson’s worldwide CEO. This new building, developed by WING, features not only offices, but also one of the Swedish company’s largest European Research &amp; Development centers. The 24 thousand square-meter property, built in the first phase of the development project of the Hungarian Nobel-Prize Winners’ R&amp;D Park, satisfies both the needs of today and tomorrow due to its cutting-edge technology and execution. As shown by its LEED Gold certification it upholds the highest standards of environmental consciousness. The new HQ will house 1800 workers. Now, with the handover of the Ericsson House, the development of the adjacent site may commence as the second phase of the 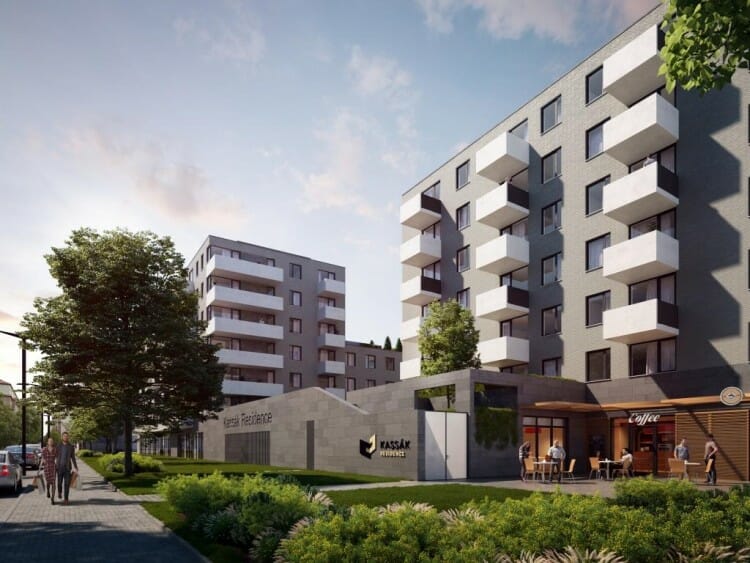 Hungary’s leading property developer is launching the Kassák Residence project under its new LIVING umbrella brand. WING Zrt. is launching its first residential property development: the Kassák Residence project in the heart of Budapest’s District XIII will be a residential park offering smart homes and primarily targeting young people pursuing a modern urban lifestyle. In the first stage of the approximately 700-unit project, two buildings containing a total of 230 homes will be constructed in the first half of 2018, with public sale of the flats to start at the beginning of January 2018. 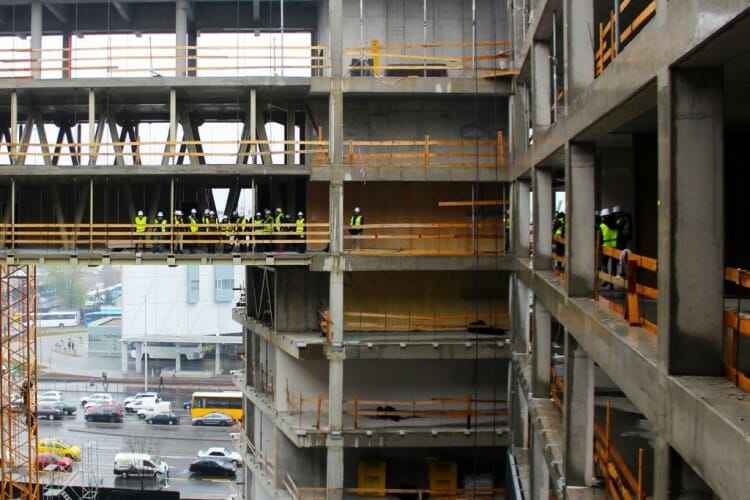 WING has customised one of Hungary’s most innovative office buildings to suit Magyar Telekom’s needs The development of Hungary’s largest office building to be constructed in a single block has reached an important milestone: the new Telekom Headquarters building is now structurally complete. The approximately 100,000 m2 building will be a defining feature of the Budapest cityscape, with a design that is based on the latest HR and IT trends. The developer WING Zrt, which has set its sights on building the workplaces of the future, has customised it fully in line with the specific needs of the Magyar Telekom Group. 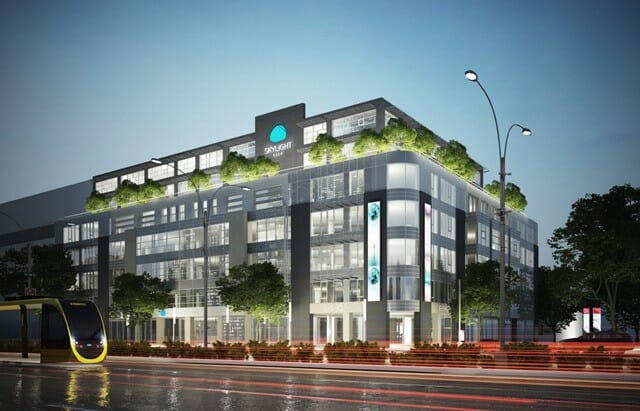 A quarter of the Skylight City office building already taken

21st century technology and superlative architectural solutions will make the headquarters building, which is being built in a proprietary development by the WING Group, into the workplace of the future 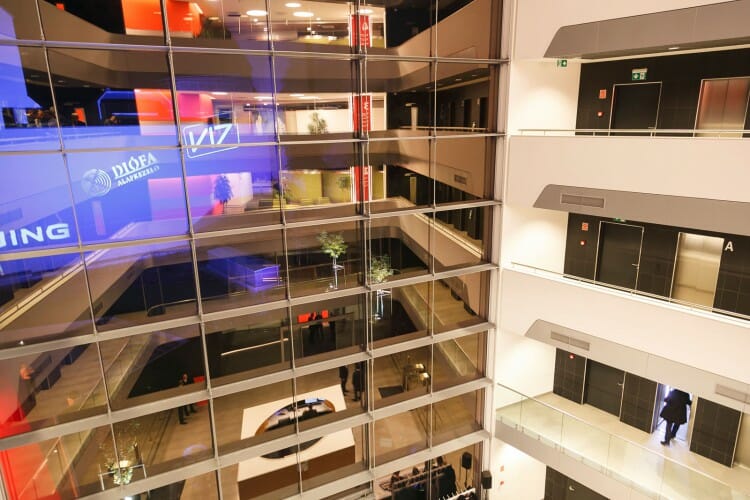 New green office building of Budapest, V17 opened its gates. The building is located at the beginning of the Váci corridor. The seven-story sustainable building of nearly 13,000 square meters area featuring cutting-edge technology, and offers "A" class office areas most of which are rent by E.ON Hungary Zrt for long term. The V17 is owned by Torony Ingatlan Befektetési Alap represented by Diófa Alapkezelő Zrt., and was developed by Hungary’s leading commercial real estate developer WING Zrt. Building V17 required a HUF10 billion investment. 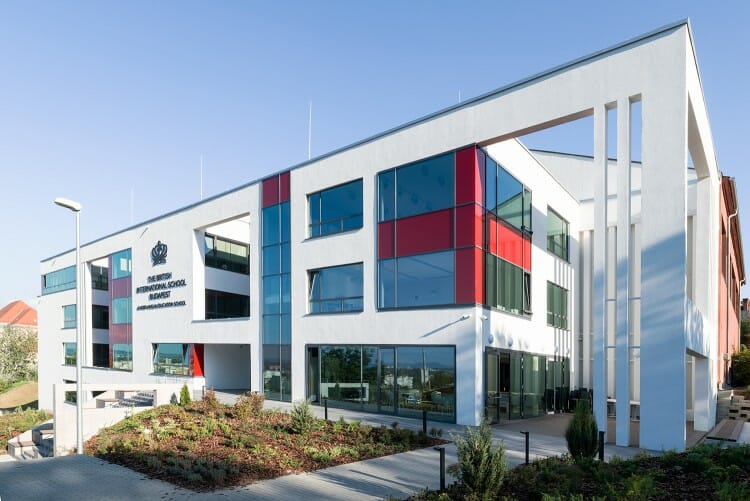 A new Wing has been built for the British International School, Budapest

It took less than a year to build the new wing of The British International School, Budapest, which was officially opened on the 23rd of September. Thanks to the construction, the school has become one of the most modern institutions in the capital city, with a size of 9000 square metres. 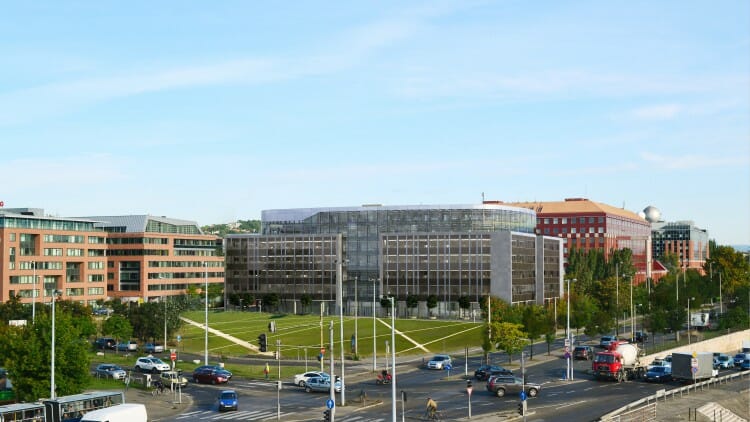 Erricsson’s new home in Hungary is being built on a site overlooking the Danube in an investment by Wing Zrt., in the first phase of the Hungarian Nobel Prize Winners Research &amp; Development Park. The building, which has a total area of 24,000 square meters, will house the company’s largest research and development facility outside Sweden. The building, one of the most modern, most innovative headquarters in the country, will be constructed to the strict standards of the LEED Gold environmental awareness rating. The foundation stone was laid on 20 September 2016 by Dr. János Fónagy, parliamentary state secretary at the Ministry for National Development, Noah Steinberg, Chairman &amp; CEO of Wing Zrt., and Ericsson Hungary’s CEO Gábor Éry. Speeches were also made at the event by Dr. Tamás Hoffmann, Mayor of District 11 (“Újbuda”), and His Excellency the Ambassador of Sweden to Hungary, Niclas Trouvé. 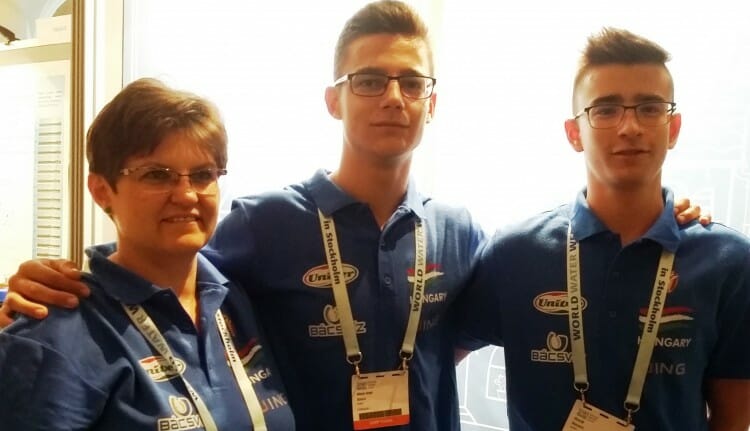 Two students from Kecskemét, Hungary are among the bests

Dávid KOVÁCS and Iván Ákos SZŰCS, two students from Kecskemét, Hungary had been earned the right to be a participant team in the global finals of Stockholm Junior Water Prize held in the Swedish capital between August 27 and September 1. The talented young people finished fifth in the finals from almost a hundred thousand team entered into the competition globally. Their project aimed to show the environmental and economical benefits of the utilization of rainwater and greywater in public institutions. 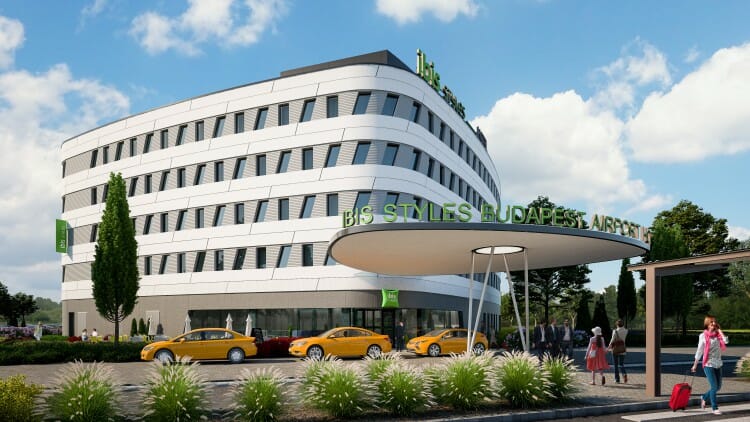 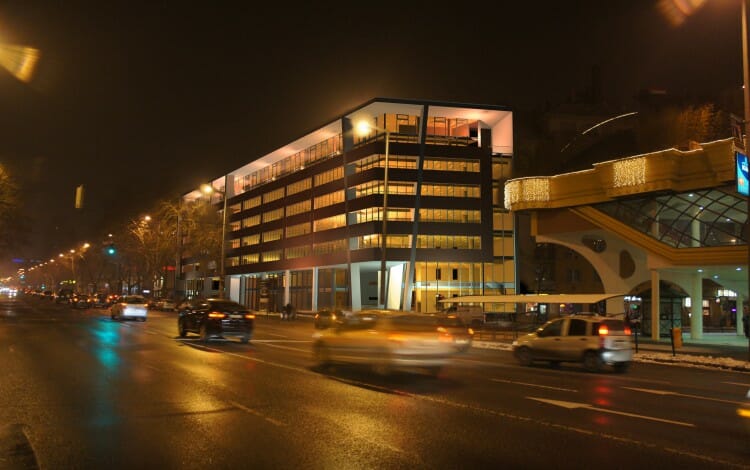 Wing sells V17 office building, deal to be completed in the second half of the year

At the end of 2015 Wing Zrt. agreed with Magyar Posta Takarék Real Estate Investment Fund, which is in the portfolio of Diófa Fund Management, that upon completion it would purchase the 12 700 m2 V17 Office Building under construction in the “Váci út corridor” business district. V17 is an office building with a “Very Good” BREEAM environmental rating, in which most of the space, 80%, is already leased out to E.ON Magyarország Zrt. from August 2016. The transaction will be fully completed once E.ON has fully taken occupancy, in October 2016. 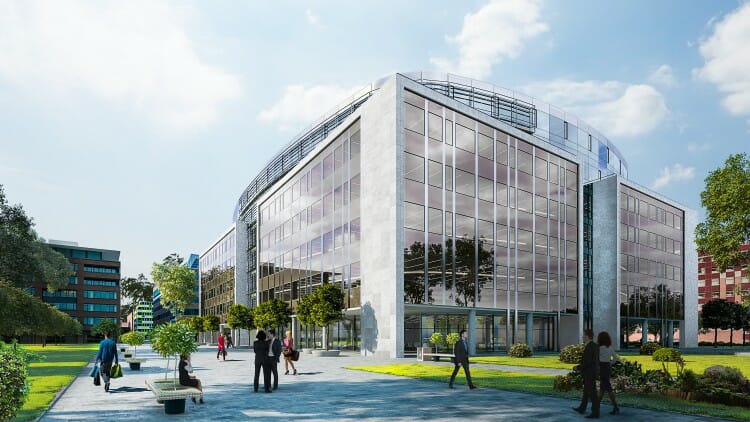 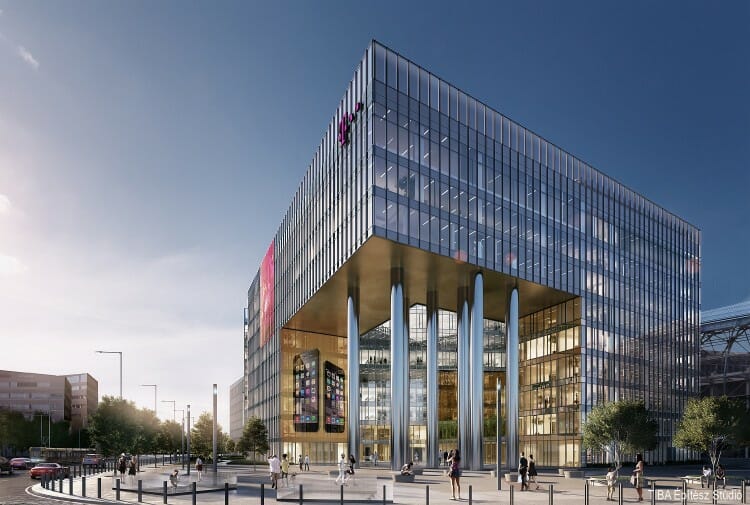 Construction of the Magyar Telekom Group’s new, 57,000 square metre headquarters building, which will be a defining feature of the Budapest cityscape, is now getting under way as a WING investment. The building, which is tailored to suit the company’s requirements in every respect and provides a truly 21st-century working environment, is scheduled for completion in the second half of 2018. The value of the investment is close to HUF 50 billion. The consortium of banks financing the project consists of UniCredit Bank Hungary, UniCredit Bank Austria and K&amp;H Bank. 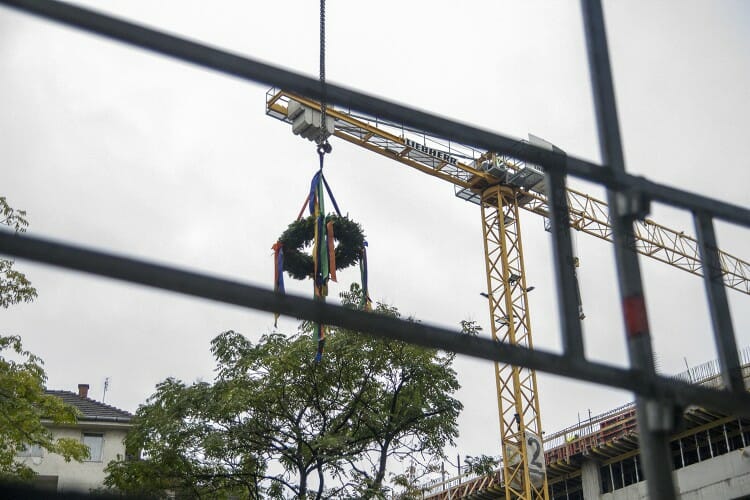 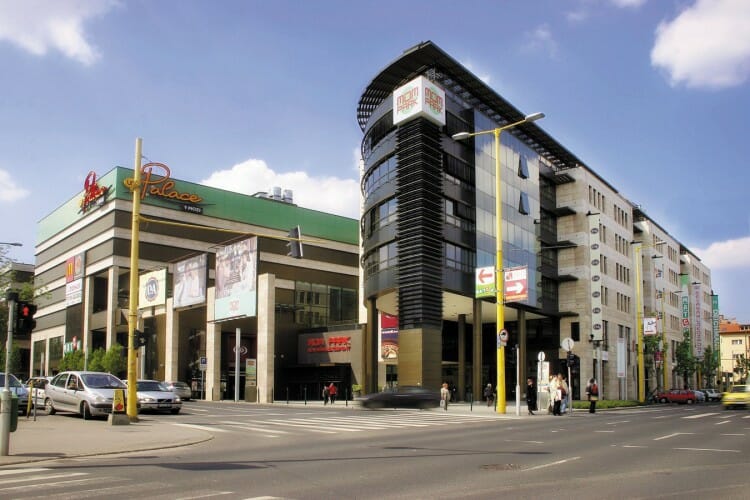 A fund managed by Morgan Stanley Real Estate Investing, in a consortium with Hungarian developer and investor Wing and Austrian shopping center specialist CC Real, has acquired a portfolio of prime retail and offices assets located in Budapest, Hungary from a fund managed by AEW Europe. 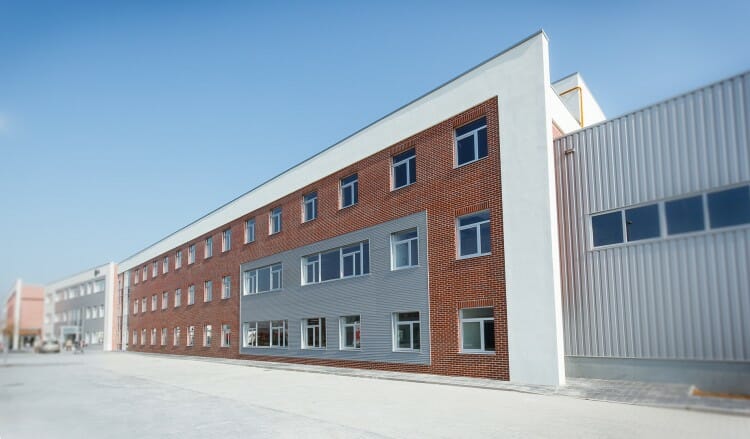 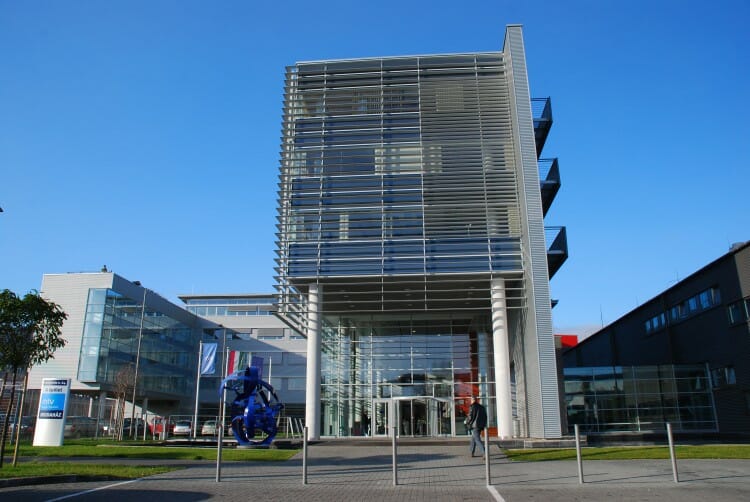 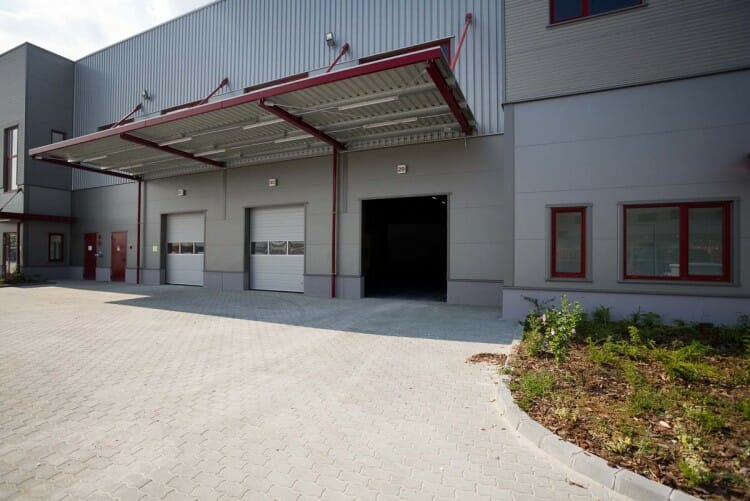 The East Gate business Park, situated at the intersection of the M3 motorway and the M0 orbital road, is the largest business park in the northern catchment area of Budapest, spread out over an area of 37 hectares. It contains modern halls that are equally suitable for warehouse or commercial use, as well as category “A” office units. 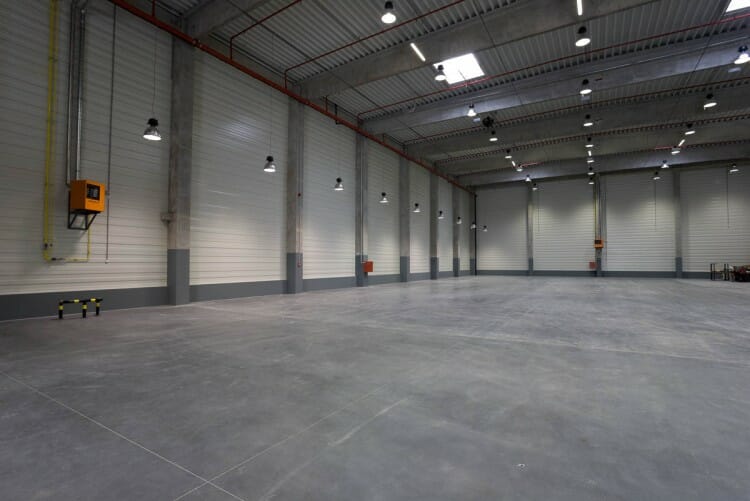 The construction of two new halls has begun at the South-Pest Business Park, on an area of close to 14,000 square meters. This is the sole city logistics park to receive bank financing for expansion this year and the go-ahead to launch construction in possession of signed lease contracts.

Noah Steinberg, chairman &amp; CEO of the building’s developer WING Zrt., and Zoltán Pokorni, mayor of the "Hegyvidék" district, laid the foundation stone for the Hegyvidék Centre together on 2 June 2011. 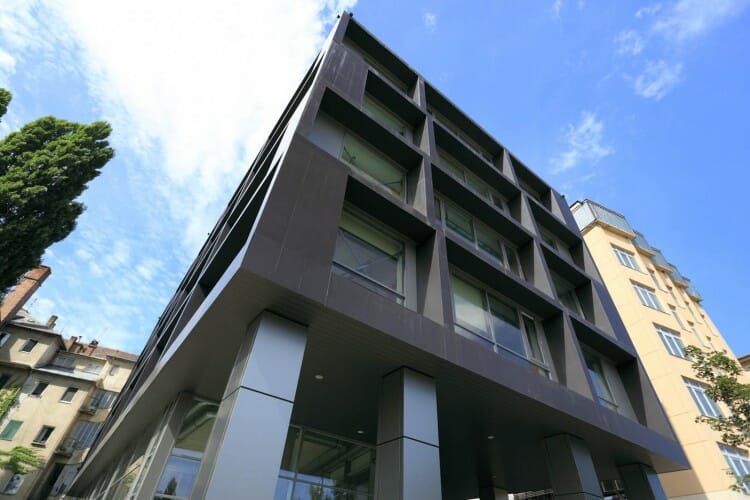 If you are hoping to find some of the very best property professionals in the whole of Europe and Africa, then look no further than the winners of a highly acclaimed property competition. The results of the Europe &amp; Africa Property Awards 2010 in association with Bloomberg Television have just been released and up there amongst the winners is WING. The company won awards in the category of Best Office Development with k3 sustainable office building and Best Industrial Development with South-Pest Business Park a sought-after city logistics centre and attended a high profile gala dinner at the Park Lane Hotel in London’s Mayfair on Friday, September 24th where the presentation took place 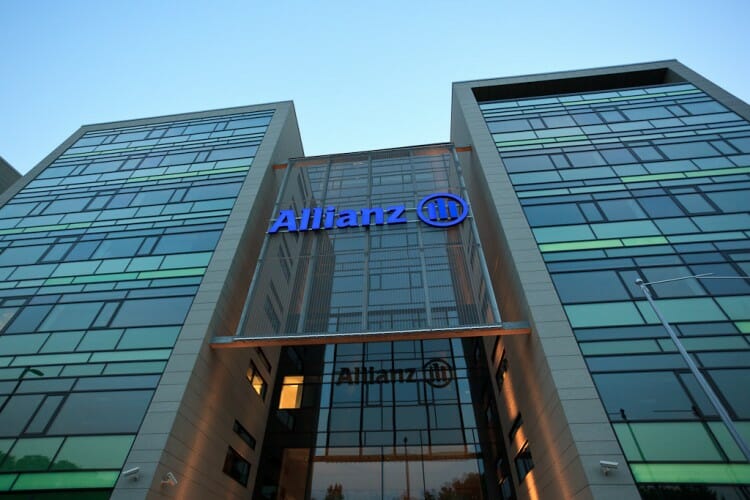 Allianz bought the latest development of WING, the sustainable office building k3 for its new headquarter 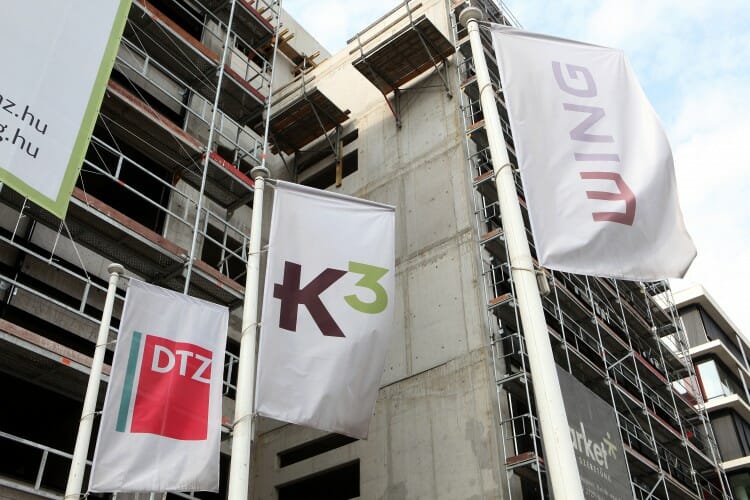 WING Ltd. introduced its new sustainable office building named k3. Situated in the newest business centre of the capital, with its 17000 m2 area coverage on the Könyves Kálmán Ringroad, K3 conforms to the international regulations of BREEAM. The A-class office complex offers sustainable and cost-effective solutions to all their future tenants through its environment conscious construction techniques. K3 will open its gates officially in March 2010. 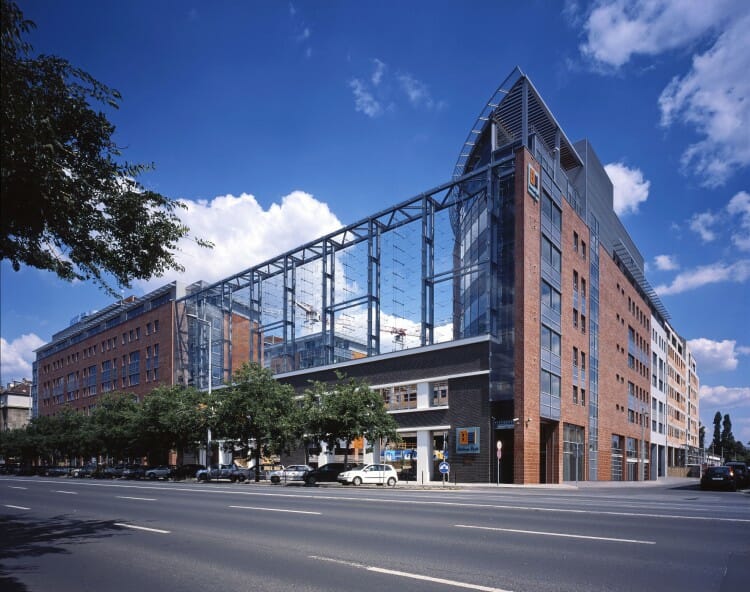 There’s even more good news for the property market and its related professionals this week as the results of the Europe &amp; Africa Property Awards 2009 in association with CNBC Arabiya have been revealed. Rightly proud of its success, WING is delighted to announce that it has won awards in the categories of Best Office Development with Atrium Park, Best Public Services Building with New Corvinus Campus and Best Retail Centre for Agria Park Shopping Centre. Winners will be invited to attend a high profile gala dinner at the Marriott Hotel in London’s Grosvenor Square on Friday, October 16th where they will be presented with their awards. 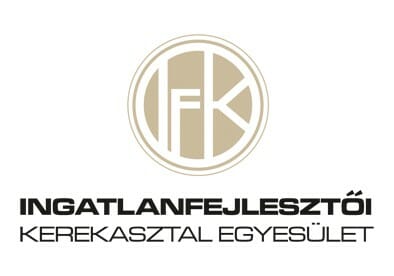 Due to joint efforts of international and Hungary-based companies, the Roundtable Association for Real Estate Developers (RARED) was formed with the participation of Hungary’s most important real estate companies. RARED considers its duty to act as an advocacy group for Hungary’s internationally recognized real estate developer companies through its development programmes concerning the built environment. 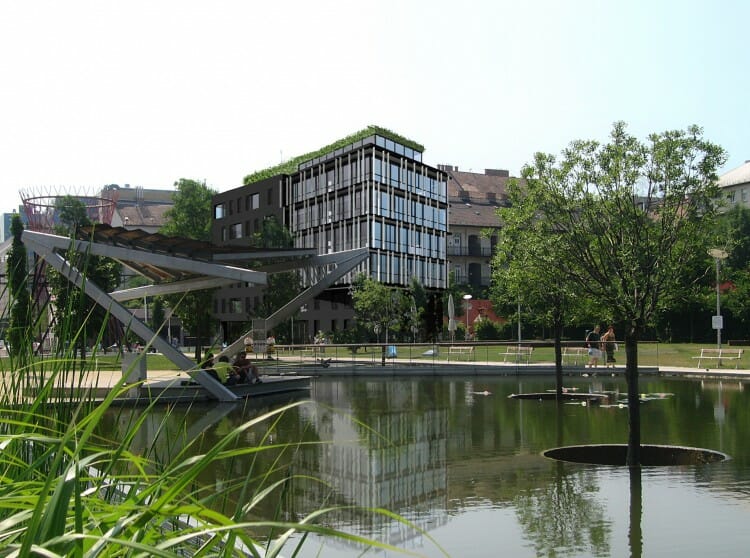 WING Zrt. is set to launch two new office developments in the market in 2009. The latest additions to the Millenáris Office Buildings complex in Budapest's Millenáris Park, the Modern and the Avantgarde, will be completed in the spring; while the k3 office centre, an environmentally friendly office complex on the Könyves Kálmán Krt. ring road, will be ready by the end of the year. Both projects have generated considerable interest among prospective tenants, which bodes well for the future of these developments. 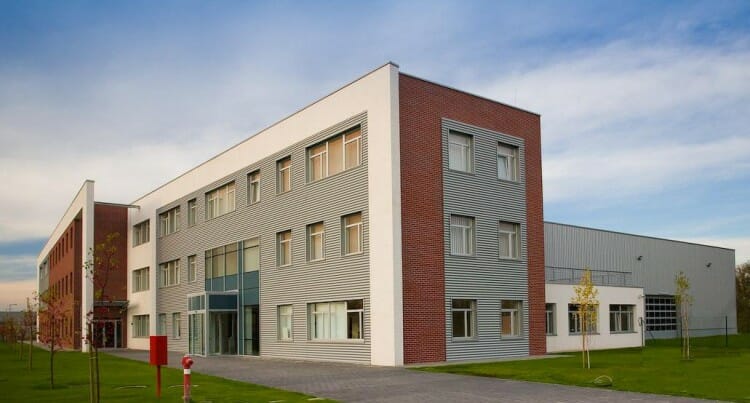 GE Hungary’s new 6 300 m2 warehouse and office complex has been handed over in the East Gate Business Park, which is located at the intersection of the M3 and M0 motorways. This unique built-to-suit building was constructed to house the company's energy division.